Apparel imports from China fell even more sharply in October year over year than in September, as the Trump administration’s tariffs continued to propel a shift in sourcing.

Apparel imports from China to the U.S. fell 30.4 percent by quantity in October compared with October 2018, according to the Commerce Department’s Office of Textiles and Apparel (OTEXA) monthly report released on Dec.5.

The administration began imposing retaliatory tariffs on finished apparel and textile on Sept. 1, as part of its crackdown on China’s intellectual property abuses.

“The steep decline in apparel imports from China in October on a year-over- year basis, marks the second month of declines since the Trump administration imposed tariffs on finished apparel and textile products from China and is a strong indicator that there is a shift in sourcing,” said NCTO President and CEO Kim Glas. “As U.S. manufacturers that have suffered enormously from China’s illegal IPR activities and state-sponsored export subsidies, we have long supported the administration’s crackdown on intellectual property violations. The tariffs on finished products are the only way to maintain leverage and truly resolve China’s rampant IPR abuse.”

Glas said the administration’s actions against China could ultimately help lead to sourcing shifts to the Western Hemisphere, which is the U.S. textile industry’s largest export market.

Textile mill product exports to the Western Hemisphere declined 2.5 percent for the year-to-date as well as for the year ending Oct. 31.

But textile exports to some individual countries in the region increased. Honduras, a partner in the Central American Free Trade Agreement or (CAFTA-DR), posted an 8.5 percent increase by quantity for the year-to-date through October

There were also other bright spots in the data, particularly in apparel imports from the Western Hemisphere, which largely incorporate U.S. textile inputs. Apparel imports to the U.S. from the region rose 0.88 percent for the year ending October.

“Early indications in the trade data show that sourcing is shifting. Apparel imports from the Western Hemisphere that largely incorporate U.S. textile inputs increased modestly and if it continues, this is a trend that will have positive implications for the U.S. textile industry,” Glas said.

The Trump administration’s tariffs on Chinese imports—imposed as part of the administration’s crackdown on China’s intellectual property abuses—are having an impact on sourcing, early data shows.

According to a pair of new reports, imports from China across a broad range of categories currently subject to tariffs, including apparel and textiles, have fallen sharply, as companies look to divert production to other countries and/or source domestically in the face of the additional tariffs.

Apparel imports from China to the U.S. fell 13.2 percent by quantity in September—the first month the U.S. applied tariffs on those products—compared with September 2018, according to the Commerce Department’s Office of Textiles and Apparel (OTEXA) monthly report. 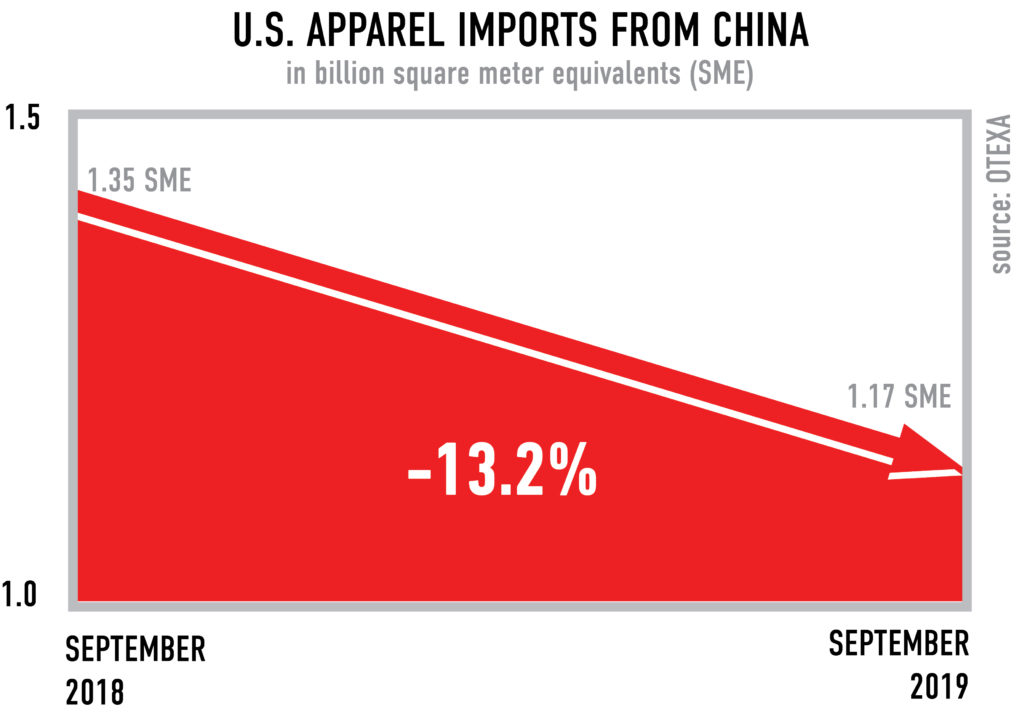 Apparel imports from China to the U.S. fell 13.2 percent by quantity in September compared with September 2018.

On a dollar basis, the decline in Chinese apparel imports was even steeper—down 18.2 percent—to $2.55 billion.

It is critical to addressing not only China’s IPR abuses but also other illegal trade practices, particularly the use of forced labor which has recently come to light and prompted U.S. officials and members of Congress to take action.

Major news outlets have reported that detained Uyghur minority groups are being forced to make clothes and textiles for global companies in China’s western Xinjiang Uyghur Autonomous Region (XUAR) that are shipped to the U.S. and around the globe. It is well documented that the Uyghur people have faced years of oppression and are forced into labor programs and internment camps in the region.

U.S. Customs and Border Protection (CBP) recently blocked a large shipment of imported garments made by the Hetian Taida Apparel Company located in that region on suspicion of forced or prison labor violations.

That action prompted the chair and co-chair of the Congressional-Executive Commission on China to pen a letter to acting Customs Commissioner Mark Morgan, calling for aggressive enforcement action to stop the importation of manufactured goods made in the region with forced labor.

The commissioners stated there is “compelling evidence to suggest that manufacturing using forced labor is not only widespread but integral to the Chinese government’s campaign of repression in the XUAR.”

“For all of the reasons listed above, we feel tariffs should remain in place on finished apparel and textile products from China,” Glas added.

She also said the move could ultimately help lead to the re-shoring of some production to the United States and Western Hemisphere production platform.

“Early indications in the trade data show that sourcing is shifting. We saw an uptick in textile exports to some countries in the Western Hemisphere, as well as an overall increase in apparel imports from the region in the first nine months of the year compared with the same period last year. These apparel imports from the Western Hemisphere largely incorporate U.S. textile inputs,” Glas said.

A second report by the United Nations Conference on Trade and Development, examining the impact on products in the first two tranches of U.S. tariffs, shows that overall imports from China to the U.S. fell 25 percent, or $35 billion, in the first half of 2019 year over year.

While textile and apparel imports from China were not included in the first two tranches of U.S. tariffs studied by the U.N., the agency still found that China had an estimated export loss in textiles and apparel of $1.19 billion in the first half of 2019 compared with a year ago.

Of that loss, some $866 million in textile and apparel imports was diverted to other countries, according to the U.N. report.

The biggest beneficiaries of trade diversion from China in textile and apparel production in the first half of this year included the European Union with $66 million, South Korea with $48 million and Mexico (the largest export market for U.S. textile producers) with $47 million, according to the U.N. report.