Watch the latest state of play on the China 301 tariffs from NCTO Senior Vice President Sara Beatty. NCTO has long supported tariffs on finished textile and apparel imports from China to hold the country accountable for illegal trade practices and help level the playing field for American companies and create good-paying jobs at home. The U.S. International Trade Commission is seeking written comments through August 24, 2022.

WASHINGTON—Section 301 penalty tariffs on finished Chinese textile and apparel imports give American manufacturers a chance to compete and provide trade officials with an essential trade negotiation tool, the National Council of Textile Organizations (NCTO) told a key government panel today in a formal written submission. Removing them, the association said, would reward China, put U.S. manufacturers at a competitive disadvantage and do nothing to reduce inflation.

Those were among the key points outlined by NCTO President and CEO Kim Glas in a written testimony submitted to the U.S. International Trade Commission during three days of hearings on the economic impact of Section 301 China tariffs and Section 232 steel tariffs on U.S. industries.

The 301 penalty tariffs should be maintained “absent substantive improvements in China’s pervasive, predatory trade practices,” Glas said in her testimony.  China’s illegal actions “have put U.S. companies at a serious disadvantage, and tariffs give American manufacturers a chance to compete.” Glas noted that U.S. trade officials have “stressed that the penalty tariffs also create leverage and are a ‘significant tool’ in ongoing negotiations with China.”

While some advocates for lifting the tariffs point to concerns about inflation, Glas said, “canceling these penalty duties would do little to ease Americans’ inflationary pains.” She also noted that “apparel prices out of China continue to hit rock bottom even with the Section 301 tariffs in place. As detailed in an economic study recently released by Werner International, U.S. import prices for apparel from China have dropped 25 percent since 2019 and 50 percent since 2011.”

Glas also warned that lifting the tariffs would have “a substantial negative ripple effect” on U.S. free-trade agreements, including undermining those with Western Hemisphere partners that have established shorter coproduction supply chains and serve other U.S. and regional interests.

The Section 301 tariffs were first imposed in 2018 in response to China’s persistent violations of intellectual property rules. By law, they are now under review.

NCTO represents the full spectrum of the U.S. textile industry, from fibers to finished sewn products.

People are desperate. Inflation is causing pain as it eats away at household budgets. But in our desperation to do something about it, we shouldn’t grasp at solutions that would have no real impact and, in fact, would be counterproductive.

Yet that’s what some are now proposing as they call for lifting penalty tariffs placed on Chinese imports. Yes, at first glance, it may seem like an easy and quick step to take in desperate times, when there are few simple remedies at hand. But we shouldn’t fool ourselves. Removing tariffs now would not make any real difference to the inflationary pain Americans are feeling, and it would set us back a long way in our fight against China’s predatory trade practices. In fact, certain retailers recently said removing tariffs would likely have a negligible effect on lowering retail prices. Barclays noted the same in their recent analysis.

What is at stake and under active consideration now are the tariffs, imposed in 2018 under Section 301 of U.S. trade laws, to penalize China for a whole range of predatory trade practices. Now, at the four-year mark after their imposition, the U.S. Trade Representative is required by law to review whether they should remain in place.

Opponents of tariffs have grabbed on to this mandatory review and hope to use inflation as the excuse for removing them. We shouldn’t fall for that ruse. Lifting tariffs would fail to ease inflationary pressures, and it would open the floodgates to more Chinese imports and show that the United States isn’t serious about addressing China’s trade abuses.

Tariffs didn’t cause our inflationary woes. These tariffs were in place for nearly three years before inflation took hold. In fact, average U.S. apparel import prices from China have dropped significantly and are down 25 percent since 2019 and 50 percent since 2011.

Households are feeling the most pain from rising gas, food and housing prices, not the tariffs.

Further, let’s not lose sight of why the tariffs were imposed in the first place. China’s illegal trading actions have harmed nearly every American manufacturing sector and cost us millions of U.S. jobs and hollowed out whole communities. China’s “devastating state-sponsored practices include intellectual property theft as well as pervasive state-ownership of manufacturing, industrial subsidies, and abhorrent labor and human rights abuses in the Xinjiang region,” three textile organizations representing companies that are part of a domestic industry employing 530,000 workers said recently in an official submission opposing the lifting of tariffs on finished textiles and apparel imports from China.

The joint textile industry submission to the Office of the U.S. Trade Representative further noted that lifting the tariffs now also would “threaten to reverse the once-in-a-generation nearshoring trends that are bringing supply chains back to the U.S. and Western Hemisphere.” Our regional trade agreements, which have unlocked historic levels of investment, would be undermined if we prematurely suspend tariffs without achieving policy reforms in China.

And U.S. textile, apparel and other manufacturers are not alone in calling for the tariffs to remain in place. Labor leaders have pointed to the loss of jobs the move would trigger. And a bipartisan group of senators spanning the ideological spectrum wrote President Biden that, “Rolling back the tariffs on China would undermine the U.S. position in negotiations. . .and signal to China that waiting out the United States is preferable to changing their non-market behavior.”

Negotiations with China continue as we seek to address longstanding trade violations and its failure to comply with the Phase One agreement it made with the United States in 2020. U.S. Trade Representative Katherine Tai has emphasized that the tariffs provide the United States with needed leverage in those talks.

Alarmists say tariffs block the importation of hard-to-get products. Yet, it’s the over concentration of production in China, fueled by unfair trading practices, that has been a key driver of these very shortages. China’s monopolization of numerous industries has been uncovered as purposeful and strategic, with devastating consequences, as in the case of PPE. Backing down on policies like the 301 tariffs is antithetical to addressing our supply chain woes.

Instead, very targeted exclusions are appropriate on certain inputs or machinery that have very limited sources of availability to help domestic manufacturers compete and create more onshoring and nearshoring. A broad rollback of the penalty duties is simply not the answer.

Today, we must stay the course and hold China accountable. That starts with rejecting the false promise that repealing tariffs will make inflation or product shortages go away. Instead, we must remain tough on China and stand up for American manufacturers and workers.

Kimberly Glas is the president and CEO of the National Council of Textile Organizations and is an appointed commissioner to the U.S. China Economic and Security Review Commission, and former Commerce deputy assistant secretary for textiles and apparel. 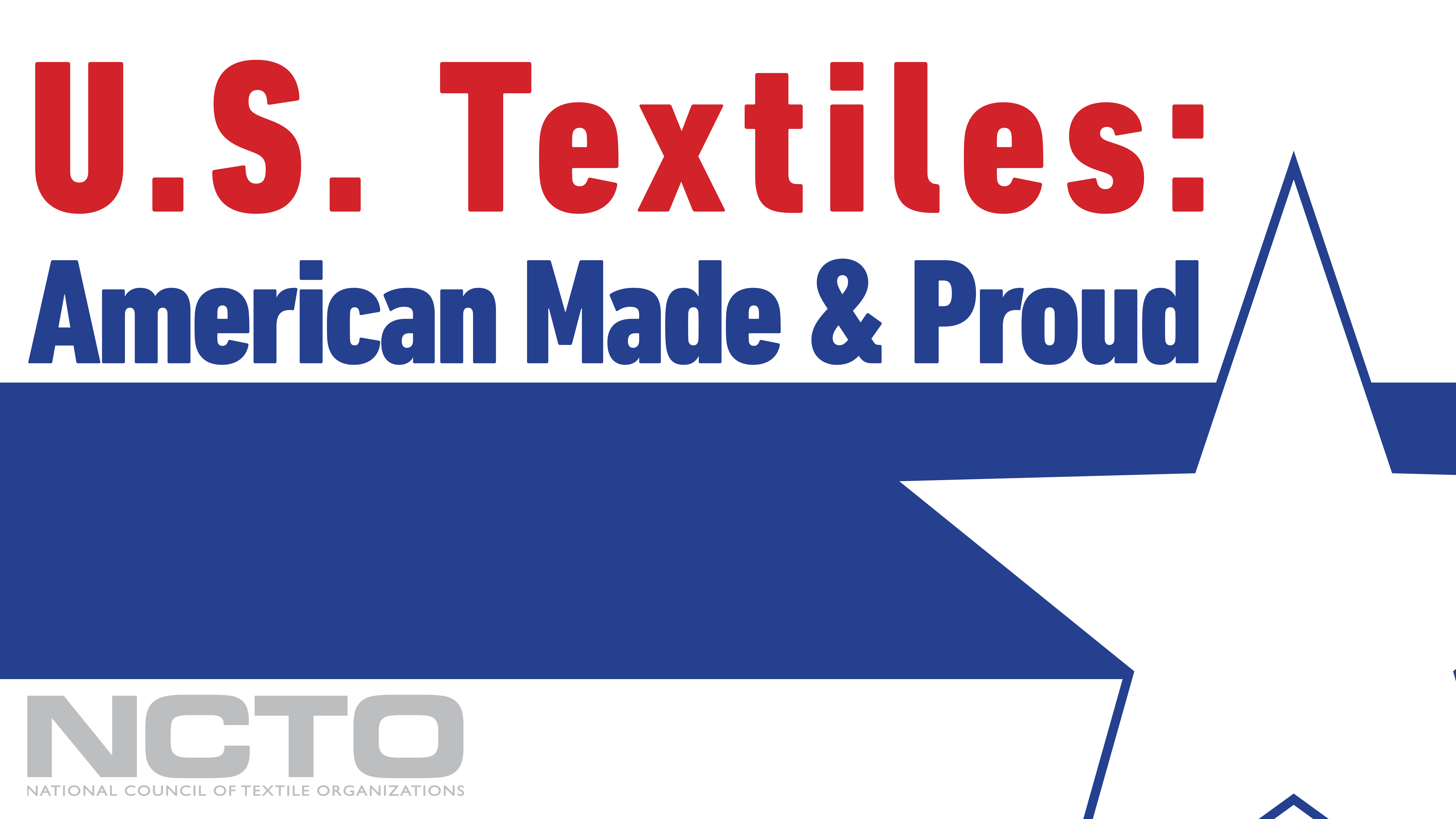 The American textile and apparel industry has a history as old as our nation. From the crafting of the very first American flag, which is credited to American upholsterer Betsy Ross, to the development of endless high-tech and lifesaving technologies, U.S. textiles represent the spirit of resilience and innovation that is woven into the very fabric of what unites us all as Americans.

On the Fourth of July we are asked to remember that spirit. So, as we take pride in our past and work toward our future, it is also worth stopping to celebrate the things we’ve accomplished together. Specifically, let’s take pride in American ingenuity, and how domestically made products help us thrive as a nation. This Independence Day, let’s support the industries that have long supported us.

American textiles represent a manufacturing industry and supply chain that are inseparable from our everyday lives, from the clothes we wear to the 100% American-made textile technology that is used to develop protective gear for our frontline medical workers and troops in uniform. Each of these items is designed, developed, and built from an enormous domestic supply chain beginning with raw fibers that are converted into yarns and then fabrics and ultimately brought to life in the form of a finished product.

As a critical manufacturing base, supporting over 534,000 domestic jobs responsible for an annual output of over $65 billion, American textile production is bolstered by key legislation, such as the Kissell and Berry Amendments, which require domestic production of textiles procured by the Department of Defense, TSA and the Coast Guard, and critical trade relations strengthened by free trade agreements that spur the use of domestic content, such as CAFTA-DR. These mechanisms, combined with the industry’s history of research-based innovation, are the backbone of the more than 30,000 manufacturing facilities both big and small across the United States. Their combined efforts make the U.S. the second largest exporter of textile-related products globally.

It’s because we have a sophisticated, innovative industry that in 2020, when the Covid-19 pandemic hit and our nation found itself in desperate need of personal protective equipment (PPE) for both the individual consumer and frontline medical worker, the U.S. textile industry was able to step up to convert its supply chain, literally overnight, to provide these products. This heroic effort alone was significant enough to inspire the Make PPE in America Act to reshore and maintain a strategic PPE production chain in the United States.

It does not take much to see why U.S. textiles are a quintessential story of American spirit and industry. So, as we take this holiday to pause and celebrate the values that bring us together, let us also celebrate the spirit of determination that drives key domestic industries like U.S. textiles. Thanks to manufacturing efforts such as theirs, Americans can rely on stable, well-paying jobs that fuel the economic activity needed to sustain communities across the nation. And by keeping critical supply chains close to home, Americans are guaranteed more sustainable and reliable access to essential products when we need them most.

This Fourth of July, let’s dedicate ourselves to preserving our independence and access to critical American-made products. As consumers, let’s prioritize American-made and, by doing so, support the American economy and jobs.