WASHINGTON – The National Council of Textile Organizations (NCTO) in conjunction with regional textile industry associations, hosted Jose Fernandez, Under Secretary of State for Economic Growth, Energy and the Environment, at an industry roundtable in Tegucigalpa, Honduras today.

The Under Secretary’s visit with leading apparel and textile manufacturing companies in the U.S. and across the region comes at a critical time, when the global supply chain has broken down and demand for ethical and sustainable sourcing is growing, presenting new opportunities for significant growth and expansion to the Western Hemisphere and out of Asia.

Textile and apparel executives with a significant stake in this co-production partnership, as a result of the Dominican Republic-Central America Free Trade Agreement (CAFTA-DR), held a roundtable discussion highlighting the need for policies that continue to support the onshoring and nearshoring of this critical supply chain, which has spurred significant job growth and economic development in the region and the United States.

Hundreds of millions of dollars of investments have been flowing into Central America, predicated on the U.S.-CAFTA-DR agreement and the co-production chain that facilitates $12.5 billion in two-way textile and apparel trade.

U.S. textile companies have made billions of dollars in investments with historic investments being made this year. The most recent comes from Gastonia, N.C.-based Parkdale Mills, the largest U.S producer of cotton spun yarn, which announced a $150 million investment in a new yarn spinning facility in Honduras in December and a substantial investment to support existing operations in Hillsville, Virginia, which will create and support 500 jobs in the two countries.

Earlier this week, ThinkHUGE publicly announced nearly $350 million in textile investments in the region, in addition to $680 million of investments in renewable energy production to further sustain this critical supply chain.

NCTO President and CEO Kim Glas said, “We sincerely appreciate Under Secretary Fernandez’s visit and discussion with textile and apparel companies today in Honduras, which underscores the Biden administration’s commitment to this critical manufacturing sector that has formed the backbone of economic development in Central America. The U.S. textile industry has invested over $20 billion dollars in the U.S. and billions more in the hemisphere over the last decade to grow economic opportunities in the U.S. and in the region.”

Glas continued, “In the midst of an ongoing global health crisis, the U.S. and Central American co-production chain continues to make sustainable investments that strengthen supply chain resilience; creates job opportunities and investment in the U.S. and the region; and mitigates the environmental and labor impact linked to Asian supply chains, as momentum grows for onshoring and nearshoring textile and apparel production.”

“This is an exciting time for the U.S. textile industry and that in the region, which is experiencing a strong rebound from COVID-19, as more public investments have been announced and will be announced throughout the year.  We are delighted to host Under Secretary Fernandez and appreciate the administration’s engagement and support for our collective industries.” 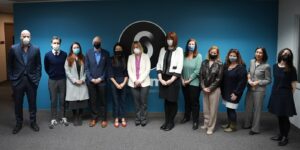 During her tour of Shawmut Corp., a fourth-generation, family-run global advanced materials and textile manufacturer, Ambassador Bianchi learned first-hand about a company that has contributed greatly to U.S. PPE efforts, investing $20 million in a new facility, which can produce up to 180 million NIOSH-approved N95 respirators and other PPE annually, creating hundreds of new local jobs.

Ambassador Bianchi’s visit marked a rare opportunity for executives to highlight the critical need for policies supporting a domestic supply chain that is a major contributor to: the overall U.S. economy with $64.4 billion in textile and apparel shipments in 2020; high-tech innovation, such as heart valves and stents, aircraft bodies and advanced body armor; and our national defense, supplying over 8,000 products a year to warfighters.

The roundtable also facilitated a discussion on key policy priorities, including the importance of policies and incentives aimed at maintaining a domestic personal protective equipment (PPE) production base, the importance of the Berry Amendment, the commitment by the industry to sustainability, and the critical nature of the Western Hemisphere co-production relationship, which supports 1 million U.S. and regional textile and apparel workers.

“We look forward to working closely with Ambassador Bianchi and the U.S. Trade Representative’s [USTR] office to advance policies that bolster domestic production by expanding buy American policies and providing incentives for onshoring and nearshoring production, while addressing illegal trade practices that undermine our industry’s competitiveness head on,” said NCTO President and CEO Kim Glas, who led the roundtable discussion, in a news release.