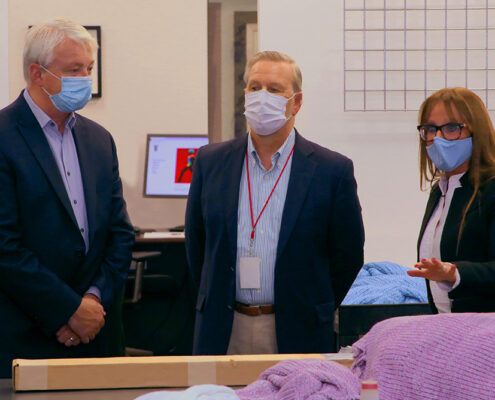 Principle Marisa Fumei-South and Controller Carole Schultz hosted the Senator on a tour of the company, one of the largest fully vertical, women-owned, family- operated textile manufacturers on the East Coast, which expanded its operations to produce PPE during the COVID-19 pandemic, despite shutdowns and an economic downturn that saw many in the industry pull back and idle production.

Fumei-South said she took the opportunity to demonstrate Two One Two New York’s capabilities and capacity housed in an 85,000-square-foot facility in Edgewood, Long Island that produces up to 48,000 dozen sweaters per month.

“They were able to see the production sweaters as well as masks in process for other government contracts. They were impressed with the organization as a whole, the substantial infrastructure and the fact that are positioned to turn quickly at any given time,” she said. “They were appreciative of our dedication to domestic manufacturing, to keeping our employees working and that we’ve remained in New York for over 30 years despite the challenges we face having to compete with imports.”

“We spoke about opportunities that could be generated for Long Island as well as New York and U.S. manufacturers and their respective supply chains as well as concerns we have in regards to policy,” Fumei-South said. “We also discussed the critical and urgent support we need to sustain the robust supply chain that we created during the pandemic before it disappears and how important it is that we keep Americans working.”

Fumei-South said she is looking forward to having follow-up conversations about mandated state procurement for PPE for New York state manufactures.