WASHINGTON—A broad coalition of industry organizations and labor unions, representing a broad spectrum of manufacturers and workers who stepped up to make essential personal protective equipment (PPE) throughout the COVID-19 pandemic, sent a letter today to Senate Majority Leader Chuck Schumer (D-NY) and Senate Minority Leader Mitch McConnell (R-KY) expressing strong support for the inclusion of robust domestic procurement policies for PPE in the U.S. Innovation and Competition Act (USICA) currently being considered by the Senate.

“Specifically, we urge you to ensure broad government coverage for domestic PPE procurement by extending rules for PPE procurement substantially similar to the Berry Amendment to the federal government’s largest buyers of these products, including the Departments of Homeland Security, Health and Human Services, Veterans Affairs, and Defense,” the coalition states in the letter.

“We thank you for including such a provision in Section 4153 of the USICA, which is substantially similar to the bipartisan Make PPE in America Act (S.1306) introduced earlier this year by Senators [Gary] Peters and [Rob] Portman,” the coalition writes.  “As you consider legislation to respond to the legacy of manufacturing and technology offshoring to China, provisions like Section 4153 are vital to reduce U.S. dependency on China for vital medical supplies.”

“Last spring when our national PPE crisis was on the nightly news showing workers wearing garbage bags as gowns and reusing N95 masks, our severe overreliance on China for PPE revealed the undeniable fact that the lack of U.S. production of PPE is a threat to our national security and the public health of the American people,” the letter states.

However, “despite PPE shortages and supply chain disruptions, American workers stepped in to fill an enormous void. As a result of its sweat and ingenuity, U.S. manufacturing produced over a billion critical PPE items such as face masks, isolation gowns, and testing kit swabs for health care and frontline workers, as well as the American people… For the first time in years, America makes PPE again,” the coalition adds.

“For this trend to continue, however, the coalition stresses that “the emergent U.S. PPE industry needs the purchasing certainty that long-term government contracts can provide.”

“We need a strong, vibrant, redundant wholly U.S. PPE supply chain to help protect us from the next public health crisis. We urge you to ensure that the U.S. Innovation and Competition Act extends domestic purchasing requirements for PPE to the four critical departments with the largest federal purchasing power for these products—DHS, HHS, VA, and DoD.”

The statement was signed by the following organizations:

The Senate Homeland Security and Governmental Affairs Committee examined key issues related to U.S. medical supply chain vulnerabilities during the COVID-19 crisis, the nation’s overreliance on foreign sources for critical medical supplies, “gaps” in the federal government’s response and policy recommendations, at a hearing Wednesday. NCTO President and CEO Kim Glas participated as an industry representative and expert on a panel of medical and supply chain witnesses. 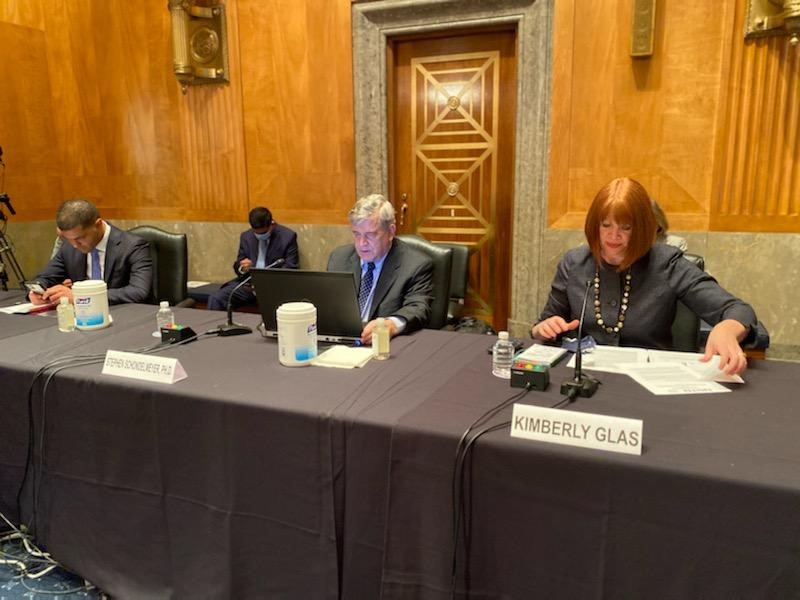 Senate Homeland Security Chairman Gary Peters (D-MI) and Ranking Member Senator Rob Portman (R-OH) opened the hearing. Both senators raised concern about the country’s lack of preparedness in the face of a once-in-a-generation a health crisis that sent the U.S. economy into a tailspin.

“Despite years of warnings about the dangers of our nation’s overreliance on foreign sources and manufacturers for critical medical supplies, our nation was still unprepared to acquire the masks, gloves, gowns and ventilators needed to treat the significant number of COVID patients, stop the spread, and save lives,” said Senator Peters in his opening statement. “…The federal government should have taken early action to ramp up production of personal protective equipment, and other critical medical supplies, by issuing emergency contracts or fully invoking the Defense Production Act.”

Senator Portman said in his opening statement: “It became apparent that by the time the virus reached our shores, there was little we could do to prevent the shortages of critical supplies. The spike in demand for medical supplies was too high, the production of those supplies too far away, and too centralized in places hit hard by the virus. At the same time, the Strategic National Stockpile was underprepared.”

Portman outlined three broad questions for witnesses: “First, what steps should the United States take to reduce overreliance on foreign countries for critical medical supplies? We need to understand how to diversify supply chains away from China, reshoring manufacturing to the United States, and incentivizing production in the Western Hemisphere.” 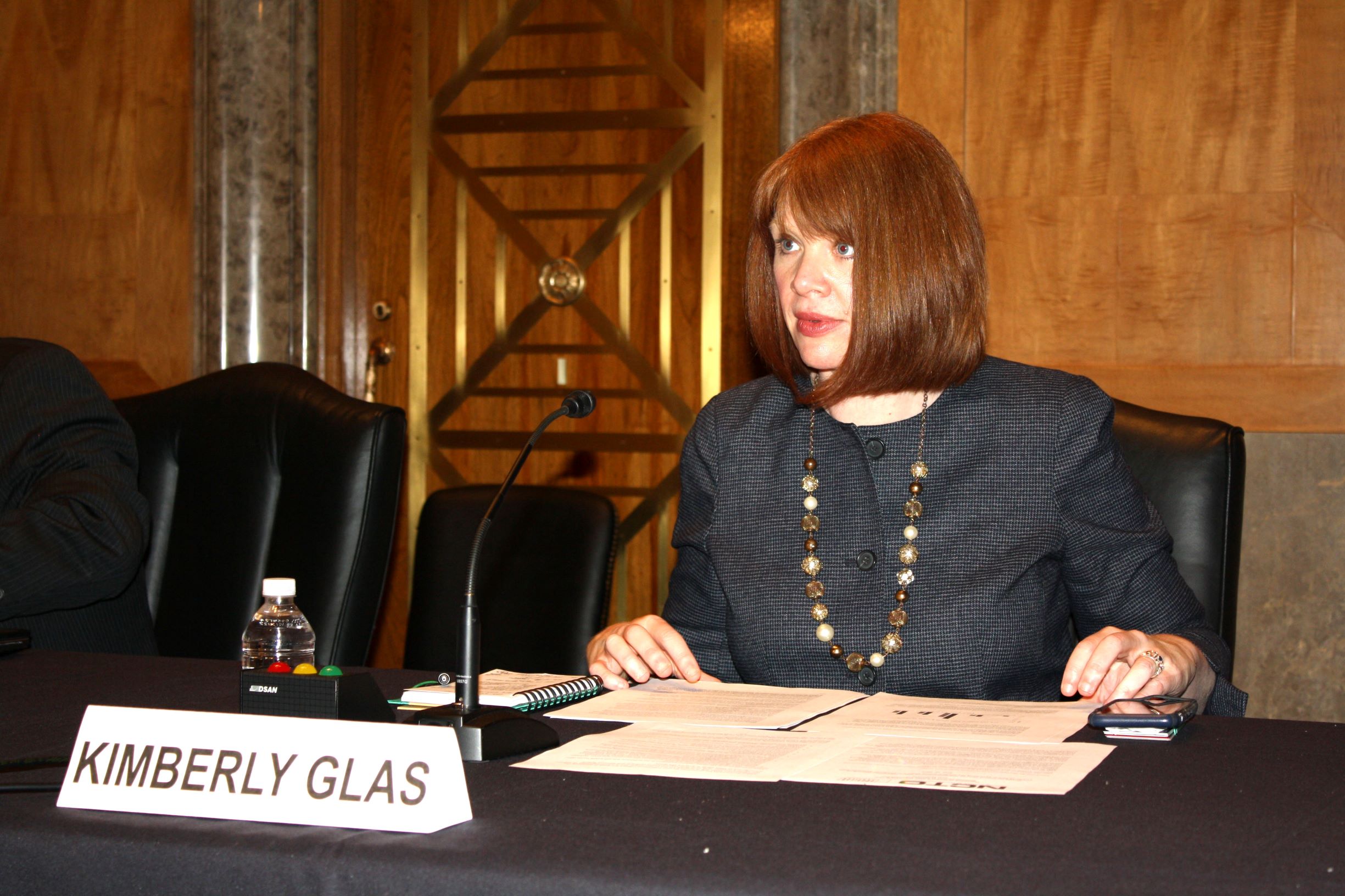 “The U.S. textile industry stepped in to fill an enormous void, producing over a billion critical PPE items such as face masks, isolation gowns and testing kit swabs for frontline healthcare workers.”

But a “strong overreliance on Chinese raw materials and finished PPE production chains exposed a severe fragility in these supply chains and posed a significant national security threat,” Glas said, adding that years of offshoring also contributed to the crisis and had “severe ramifications.”

“I come before you today with an urgent plea,” Glas said. “We must get critical policies over the finish line immediately or the very supply chains that were retooled and reconstructed will remain fragile and largely offshore,” adding that China has exponentially expanded its global dominance of PPE production.

For her full written testimony and policy recommendations please see the link here.

Another witness, Shereef Elnahal, M.D., President and CEO of University Hospital in  Newark, New Jersey, outlined the magnitude of the emergency room visits, 83,000 in total, last year and the hospital’s lack of preparedness to “address the surge of patients.”

“As the number of COVID cases in our emergency rooms and intensive care units doubled, tripled and quadrupled, we found ourselves at risk of running out of supplies for which we have never seen shortages before,” he said in opening remarks. “This includes protective equipment for our staff, and ventilators for the patients with the most severe cases of COVID-19.”

“One of the things that we’ve talked about today and we’re trying to figure out is how to make more PPE here, but use market forces to do it, so it makes sense,” Portman said. “And, we have manufacturers here in this country who are willing to make stuff, but they need to know they’ve got a market. And if they don’t, they can’t make the significant investments, millions of dollars, to be able to convert their plants,” Portman said.

“This has particularly been tough on the textile industry, and Ms. Glas, I want to thank you for being here but also your hard work and support of the Make PPE in America Act, which you mentioned we introduced and was passed in the Committee just last week,” Portman noted.

The senator also asked Glas why long-term contracts are an effective way to spur market forces to incentivize production in the U.S.

“It provides a critical demand signal for our industry that there will be a purchaser and that they can invest in the new equipment necessary,” Glas said. We have Ohio manufacturers….who have looked at trying to invest more here in the United States, but they won’t without a strong demand signal,” she said, adding that other countries, like Canada, are issuing long-term contracts to their manufacturers to bolster production.

For more on their exchange, please see the a link to the transcript provided by the committee here.

Senator Josh Hawley (R-MO) asked Glas about the offshoring of the U.S. textile industry and the role trade policy played in it.

Glas pointed to several key trade decisions, including the accession of China to the World Trade Organization and the removal of quotes on textile and apparel imports, as key drivers behind offshoring.

“This played out on a national stage when COVID hit,” Glas said. “How many US textile manufacturers did I represent making PPE [before the pandemic?] Probably two or three. What happened during the pandemic? About 140 companies of mine retooled their production chains to help fight the crisis and now a lot of those companies simply have no orders.”

That has been compounded by an onslaught of Chinese PPE imports, which have increased 756 percent in the past year and are often dumped on the U.S. market below cost, she noted.

“We have a U.S. industry that has invested and who want to make products here but with no long-term demand signal by the federal government. And we have not solved the equation of how to get hospitals and nursing home to purchase products that are made here in the United states.”

Hawley asked Glas to explain why the “deck is still stacked” against the textile industry today.

Glas touched on the unfair playing field in competing against China, which has a long history of human rights abuse and has more recently been accused of “genocide” by U.S. officials, and imprisoning Uyghur Muslim minorities in detention camps and forcing them to make consumer products, including apparel and textiles, for global brands.

“It is hard to compete globally with subsidized industries all over the world including China. We have domestic manufacturers who can be globally competitive. We just need to send them a strong demand signal and we need to get policies over the finish line here in Congress to make sure we can be more globally competitive,” Glas said.

She stressed that it will take a “whole of government approach to trade enforcement” to address the imbalance in our trade policy as it relates to PPE textile products.

Senator Jon Ossoff (D-GA) said he never again wants to see the images of nurses sewing their own face masks and donning garbage bags as gowns that played out at a local hospital in Georgia during the pandemic.

He asked Glas if the government and country have taken the necessary steps since those early months of the crisis to ensure frontline workers never have to resort to homemade PPE again.

Glas said that while our industry was able to retool and invest in critical PPE, she is concerned that in a few months from now, those domestic supply chains will go offshore again, without long-term funding from the Defense Production Act.

“We are going to need to diversify supply chains moving forward. We need to show a demand signal to the industry,” she noted. “There needs to be incentives for hospitals like the one you have that want to purchase MADE in USA product that costs a little bit more. And there are a lot of Georgia textile manufacturers that want to respond to your local hospital systems and make these products long-term.”

The entire hearing can be viewed at the link here.

In written testimony submitted to the committee, Glas provides an overview of: the U.S. market prior to the pandemic and the root causes of America’s dependence on offshore sources for medical PPE; the heroic response of the U.S. textile industry; the federal government’s response to the crisis; and a series of policy recommendations to incentivize the establishment of a permanent domestic PPE supply chain.

“The time is ripe for a revival of American PPE textile manufacturing. It has already begun, but we are at a pivotal point,” Glas adds. “Without the necessary  policy response and support, our recent progress will be undone just as quickly, and China’s stranglehold over global medical textile supply will be locked in for the foreseeable future with no reason to invest here. However, with the right policy framework, the domestic PPE supply chains built overnight can endure and grow, creating a level of self-sufficiency domestically that we have learned the hard way is essential to our national health and economic security.”